The day after #Thanksgiving in the United States, I pray so my #heart keeps opening to the light. “Dear God, Remove the walls I have constructed around my heart. Remove the barriers that obstruct my love, that I might give and receive the truth of who I really am. Remove my fears, that I might dwell in peace and share my peace with everyone. “ @mariannewilliamson in her book “A Year of Miracles: Daily Reflections” copyright Marianne Williamson, HarperOne publisher. Gratitude is a practice that needs consistency and doesn’t stop at a day in the year. I am so grateful for all the sources of daily inspiration I receive freely at every breath I take and my only desire now is to go out and give it back to the world that needs light and love from above. Wishing you all a good Shabbat #shabbatshalom
As we are entering the season of #thanksgiving, I cut the last rose of my little garden. Giving thanks for the beauty and the warmth, the fragrances that always bring comfort and joy.
Colors of the #fall
#Lewisboro celebrates #pride
Today I would like to support the Etsy kind and grateful shop for your Soul KibowCO
#spring #blossom Be open to the beauty of the world
Stream of consciousness - had a conversation with friends recently about this urge to share publicly about thoughts and emotions that would have stayed private and unknown in a time when social media was not facilitating and enabling
Showcasing a thank you card I treasure
Thank you card from my friend Constance in Sacramento, CA for the books I passed on for her daughter Abigail.

photo: Shema Israel – Ecoute, Israel – the first two words of the centerpiece Jewish prayer, day and night, and until the last moment to bear witness of the unicity of God

September 11th ~ In the rising of the sun and its going down,
We Remember Them.

In the blowing of the wind and in the chill of winter,
We Remember Them.

In the opening of the buds and in the rebirth of spring.
We Remember Them.

In the blueness of the skies and in the warmth of summer,
We Remember Them.

In the rustling of the leaves and in the beauty of autumn.
We Remember Them.

In the beginning of the year and when it ends,
We Remember Them.

When we are weary and in need of strength,
We Remember Them.

When we are lost and sick at heart,
We Remember Them.

When we have joys we yearn to share,
We Remember Them.

So long as we live, they too shall live, for they are now a part of us.

This year was a hot and beautiful day, unlike the crisp and bright perfect day that had started fifteen years ago, to evolve in a day that changed the century in the entire world for ever. We can remember each year in a similar way, and we can add remembrances and other memories that start to cling to the date, and we can hear the names, read one by one, of those lost on that fatal day, and some portraits be drawn by the loved ones who give flesh and tears to the name that they honoring publicly on that day.

The ceremony is slow and emotional. At the times the planes hit each tower, then at the times each tower collapses, we hear a bell, a gentle ringing, nothing stirring, not the sound of a shofar, just a delicate bell, and still, we wake up a conscious thought to stand and reflect on the beauty of life, the hopes and the yearning for peace.

At the end of the ceremony, officers play Taps as to send us back to life, always, to go back to doing the best we can to remember to be at peace with our loved ones and to be listening so that we can hear what the other is yearning for, which is never very different from what we are yearning for ourselves. 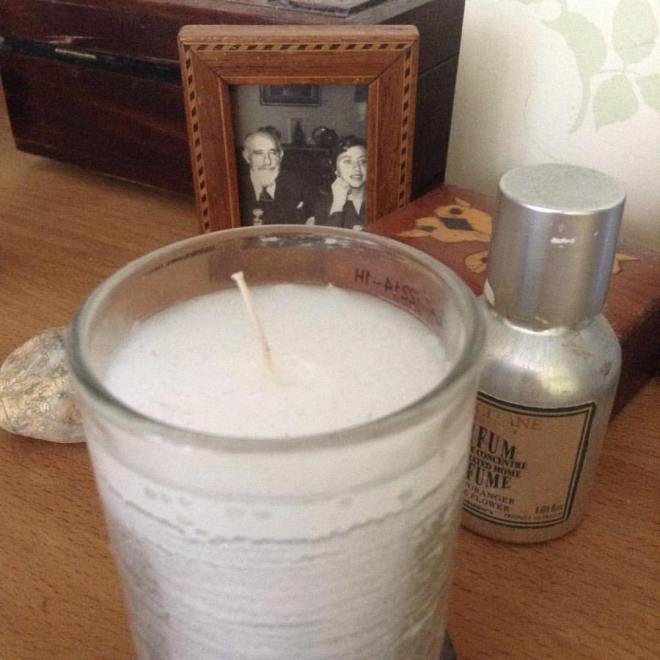 Tonight is the yahrzeit or anniversary of the death of Rachel bat Sa’adia, my mother. The little picture you see of her behind the candle is her father, Sa’adia was his Hebrew name, and my mother, whose secular name was Colette Rachel. She looks like a teenager on the picture, I think it was taken in 1952, so she was already in her twenties and probably celebrating a diploma or a graduation because there is champagne in front of them, and the background tells me that they were in the apartment I have known in Paris where my grandparents moved to in the fifties, before the start of the war in Algeria (which started in 1954).

*The verse that I chose on top of the picture is from Tehilim (Psalms) טז = 16
verse 8 and it is translated in the version I have under the eyes as “I have set the Eternal before me always be Adonai [the Eternel] is at my right hand, I shall not falter“.

The whole psalm is a very important part of the month of Elul, because it is a “special psalm” where King David speaks to God in such a close way, and the study of this psalm should allow us to the same type of closeness, a genuine approach, and request for help in our moments of difficulties.

When you feel lost at heart and insecure, you want to ask for protection and this is what this psalm – as most of them do – allows us to do with poetry and force, especially when we study the Hebrew words, with their root, their meaning, their pronunciation ~ and yes, this is what I probably marvel in the most ~ their grammar. This psalm is short, so I had all the time today during my journey to NYC to study, and although I had done it on previous occasions, during Elul of past years, this year it really took a totally new meaning of acceptance for me, because I was at the end of that year of bereavement, I suppose. Or maybe, because I was not too distracted as I was contained in a traveling wagon  for an hour.

And suddenly, it was as if David’s words in the psalm where allowing me to feel the “glue”, what actually relates me with the spiritual dimension of the losses as actual presence, and not absence: by setting my mind into the Eternal and meditating on the words and concentrating on my breath, I could actually feel small but protected, humble but strengthened.

With the eighth verse I was reminded of this series of BlogElul, and what we had already said about action: we have to take an action to remove ourselves from the distractions and have that active kind of “conversation” with God if we want to feel the presence: God does not appear to us, like a movie character in a well-written screenplay, we set God in front of us, actively and deliberately, as an intention, or a firm decision for a moment and we call this moment “always”, but since we keep forgetting, we set appointments.

This is also why we inscribe this very same verse in our synagogues often, and in our siddurim (prayer books) as a reminder of the “always”, because, yes, indeed, we keep beeing distracted, we forget to save our work and the power or the connexion gets lost, or we leave the dinner in the oven too long, or we miss a train, or… fill in the blank of all the things you do every day while you rush and forget to be focused!

There is no way to avoid being confronted by harsh things and disappointment, and sadness, and loss, and abuse and violence, and fear and feeling despaired. But we always have that possibility to deliberately choose to place ourselves in a space where we put our hopes and our rock, space where we have experienced strength and protection and we can feel it again by just recreating it in our mind. And there, we replenish.

Inspiration comes and goes. The same goes with time. And all of a sudden, time is gone. People you loved are gone. You go by the calendar to remember things to do. And you don’t see yourself age. And then it is a birthday. An anniversary. Time to celebrate a gone by time.

Nature reminds me of being grateful. Nature does not go by the calendar. Nature goes by the rythm. By laws that I don’t control. I didn’t create the world. I was not there when it was created. Why should I want to control it so badly? Why would I forget that I have no right to complain and whine about its course? I should only be in awe. And grateful.

We are all in it now. I can do my part. You can do your part. I do not need to do your part if you do it. You do not need to worry if I do mine. We just need to know we are in together. Each working our part together. Listening to each other. Feeling each other’s pains and joys. Sharing the same world of wonder and excitement.

Together we create the beauty we don’t see in our own work. When in doubt, never give up. Each part can look dull and they only make sense together. Before you know it, beauty is there. Not because of you. But not without you either. You have to be part of it. And be grateful for it.

Twenty years ago, today, I was marrying the one who would become the father of two beautifully loved boys, our sons. This was a sunny day, like today where I am at now.

Although the dates are the same, I think I would have forgotten it was the anniversary of my marriage, had I not wondered why I was feeling kind of over-emotional. And because I always tend to analyze (over-analyze?), I realized that was it! Especially because several recent conversations with that partner in life had been pretty tumultuous (understatement intended).

It was supposed to be a happy day, and certainly it was. But it had already so many red flags that will not show on the official picture, but that I will eventually read in those that stayed still in the memory book.

I chose to hide and not to tell, until much too late. I chose to pretend that the story was the one I was making up, showing off, and eventually brushing under.

There was no blogging at the time. No Instagram. No Twitter, nothing to catch glimpses if they were not looked at with the scrutinity they deserved. But I knew. I knew something was doomed, something was wrong and I failed at dealing with it.

It is certainly time for me to heal from my stories. This one too. Twenty years ago I got married to the man I thought would be a soulmate, not another cloud in my path. I now want to see the skies, as blue as they are, and not carry that cloud above my head, over and over. It is time to heal.